Social Media Is A New Kind of Fiction (PART ONE) 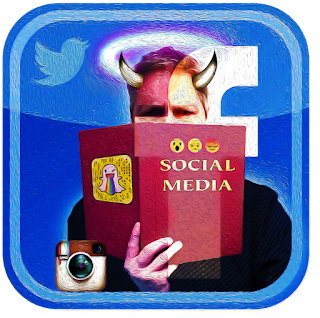 Social media is a new kind of fiction.

Those of you who know me know that I don’t normally like to post anything serious on social media, but lately I’ve been feeling a great disturbance in the force, as if millions of voices suddenly cried out in annoyance and were suddenly…amplified.

I know some people who are perfectly delightful when I see them out and about in the world. Strangely, when I encounter them on social media, they often seem strident, angry and nastily opinionated. Not that they don’t have strong opinions when I’m physically with them, they just seem to be more dimensional and rounded beings out in the midst of reality. That roundedness makes them easier and more enjoyable to be around. And based on experience, I think it is closer to who they really are than what I see on the Internet. I know other people who in the real world have difficulties and issues they’re facing, but on social media, they seem to lead lives of perfection, bliss and triumph. They look as if they’ve got it all together and are just pausing for a second to post a photo of an awesome brunch that they are going to enjoy without worrying about calories or cleaning up after. Neither group much resembles the versions of them I think of as real. Many people I know actually seem to be amplified in both directions at the same time when I read their tweets, view their Instagram pictures or see their Facebook posts.

And so I have come to the conclusion that social media is a new (and currently insidious) kind of fiction. Think hard about the people you know in real life, and compare them to the versions of them you see on the Internet. Do they seem the same to you? Or are they a bit like caricatures of the people you know or maybe commercials for themselves?

I have no objection to fiction—as a writer, I relish fiction—and I would normally be very excited at the discovery of a new form of it, but I am currently concerned. You see, the insidious bit that I mentioned earlier is that a lot of people appear to be viewing social media as a new kind of reality. I first encountered this “new reality” idea while doing branding work. We’d receive brand research, and it would refer to social-media marketing as “reality-based” or call it the “new reality.” Many brands are using social media as a way to gather information and insights about their audiences—just the way many businesses are gathering “big data” about who people are by tracking their use of the Internet and their interactions on social media. And they are using this information to shape how they think about people and interact with them…on social media. Seems a bit like weighing something with your thumb on the scale.

However, it’s not just brands and businesses interpreting social media as reality. More and more people are getting more and more of their news and information from social media. More and more people are interacting with their friends and acquaintances more and more often through the filter of social media. More and more people have friends and acquaintances they have only ever interacted with on social media. And the view social media provides is different from the reality of people that I know, the society I think I’m a part of and the world I feel I live in. Everything is a bit amplified, exaggerated, cartoonish—less real. This fictional landscape is a minefield of conspiracy theories, vicious personal attacks, middle school–style “unfriendings,” self-doubt-generating success stories and aspirationally beautiful but taken-out-of-context moments that make life seem like a library of genre fiction thrown into a blender with a few dodgy news reports.

I think this may be dangerous. I think that if we remain unaware or simply don’t acknowledge that social media is a new kind of fiction, we risk growing increasingly disconnected from reality and may drift dangerously toward living in weird little pockets of fantasy, many of which seem to violently repel each other and push us farther away from each other and from reality. I like social media. It is fun. It is a great way to keep in touch with people who are physically too far away to stay in close personal contact with otherwise. It’s an interesting place to find rumors and occasional facts about what’s going on in the parts of the world that aren’t right outside one’s window. It’s a great place to find a moment (often way too many moments that turn into hours) of amusing distraction and playful creativity. It’s a great place to share and tell stories. But it isn’t reality. It’s a new kind of fiction, and it’s always dangerous to mistake fiction for reality.

Of course, I could be wrong. What are your thoughts?
Posted by Jim Hardison at 10:56 AM 2 comments: